London Riots: Parallels From the Past 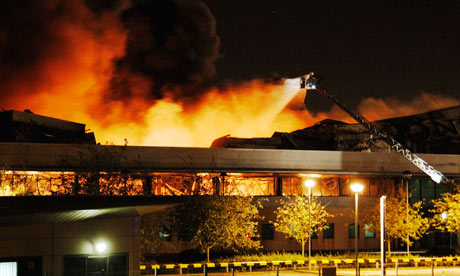 The blaze that engulfed a Sony DADC warehouse in Enfield could have a catastrophic effect on independent record labels. Photograph: Luke Macgregor/Reuters

I’m too old these days to wander round the streets of London. After many years of street photography I have witnessed and recorded much aggression vented. From the BNP Welling riot of 1993 to the snapping of fast cars going around Brands Hatch racing circuit, it has been recorded on celluloid and now gathers dust in a box somewhere in the spare room.

Today I do not even wander round , after say, 6pm at night the streets of the sleepy place in which I have lived for the last 6 years. Not because I fear a riot breaking out here you must understand. It’s more the fear of not finding my way home again given that dementia could set in at any time as I grey and shrivel up in my old age.

The latest riots on the streets of our cities, observed from the comfort of my armchair and plasma TV screen (bought and paid for with hard earned money I might add), reminds me of two former lives whereby I witnessed both riot and youth dissatisfaction, although not always at the same time.

If you want to know the time ask a policeman. Ilford HP5 400, copyright the author 1993

Firstly the Welling disorder that broke out on the Anti-Nazi League march on the BNP headquarters, then in Welling south east London. Determined to make a stance against the BNP’s overtly racist stance, the ANL planned to march to the doors of the BNL. The police on the other hand, had other ideas. If you ever wondered where the notion of ‘kettling’ came from, look no further than the junction about 200 yards from the BNP building further up a hill to the south. Four roads met and three roads became blocked by police determined to not allow the marchers to move any other way than back to their coaches to the north of the junction. Even a memorial garden to the west was blocked off with chicken wire put up to deter protesters the opportunity of finding sanctuary from charging police horses. The wire did not last very long and the garden eventually became a medical point for the treatment of the many gashes and scrapes that occurred during police baton charges. Later in the afternoon I was to  use this area for my own purposes, namely to escape the house bricks of the anarchists that had infiltrated the march and the counter measures so effectively carried out by the police lines. ‘Take the high ground’ I was once advised and it certainly worked that afternoon.

Whilst reloading the camera I overheard one black youth shout ‘There’s not enough blacks here. If there were more of ‘us’ we could rush the ‘filth’ and break through. Then in what I can only describe as a fit of sarcasm, he proceeded towards one police line to ask a policeman for the time, gesturing wildly to his wrist in the process.

This cat and mouse affair continued for another two or so hours. At one point during a lull in the fighting, an old man appeared from almost nowhere to take his stance against the police lines as missiles were thrown over his head towards the police. Onlookers were in awe of this man who must have been in his 80s. There was a small contingent of holocaust survivors in the ANL march and I can only assume that he was one of them. His defiant look is inspiring.

From this point on I was getting both tired and bored and in addition was down to my last few rolls of film. Something digital cameras do not have to worry about these days. I made my way to the rear to be greeted by more police lines funnelling the marchers through the graveyard to the north of the junction. There was a reason for this. They had set up a film camera to photograph all marchers passing out of the crossroads. They had previously filmed all the photographers and press prior to the confrontation. This became a milestone in covering riots and confrontations with police. On the following Monday police started to call in all the film and still photography for inspection and if I remember it well enough went to court to get some photographers to give up their film.

This was the point at which I decided I would no longer go to such confrontations. I truly thought that it was the start of a slippery slope to a police state. Up till last week however, this had not happened of course, but I was not to know how that would pan out. With the explosion of digital photography, mobile telephones and social networking, there is no way of knowing how right or wrong I was 17 years ago. The jury is out on that one right now.

The second experience that comes to mind following the London riots, is my youth during the early to mid 1960s. The era of mods and rockers. Not that I think there is remotely anything similar in the disturbances that occurred in the 60s to those of the last week or so. What does resonate with me is the feelings of being young in an ever increasing consumer world. I too wanted that pair of Levis, that button-down  shirt, that twin vented mohair suit!

The difference is, I would not have had the remotest idea of wanting to loot the local store to obtain them. I knew that saving up was the way to go. Going without, despite the peer pressure, was the norm in our household. Then my parents had gone without many things during World War Two and after with rationing still being applied during the early years of my life too. We had form in that respect.

So when I observe from the comfort of my armchair I am both angry at the violence and saddened at the absence of discipline in some of our urban youths. Wanton looting and destruction cannot be condoned, but at the same time it also has to be understood in the context of today’s environment both culturally and economically. I do not profess to have the answers, but I suggest a long hard look at our recent history will go some way to understanding where we have come from since WWII.  We can only be a better society for it in the months and years ahead.